Sprite was that special dog that you only have once. Although she loved all activities, tracking was her favorite. She earned her TD at 8 months, her TDX at less than 2 years, and her VST and Champion Tracker (CT) titles at less than 4 years old, to become the first terrier VST and CT. 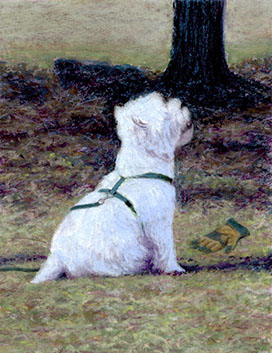 She also earned titles in agility in the early days of AKC agility when Westies had to jump 12", and in her later years switched to Preferred to keep having fun. She earned her Master Earthdog and Rally Novice titles at our National in 2006 to qualify for the Master of Versatility title in the national club.

She was also a breed champion and the dam of a litter of eight and a litter of two. Many accomplished show and performance dogs have her in their pedigree. She was healthy all her life and lived to just over 17 years.

There will never be another like her for me. But I see her qualities of love for life, gentleness, sound conformation, and work ethic in her descendants, so she still brings me joy every day.